We’ve loved listening to the story of ‘The Three Little Pigs’ this week and by the end of the week, many children were beginning to join in with the repeated refrains in the story. They enjoyed using the props in the book corner to re-tell the story so we will continue and consolidate this next week.

Many children have shown an interest in dinosaurs since we returned to Nursery. We’ve gradually added a few dinosaur themed enhancements to our provision to capture this interest. We have been exploring printing with dinosaur shaped stamps and making dinosaur footprints in the playdough. A few children were fascinated with the imprints and textures that the dinosaurs body/feet made as they pushed them into the dough.  We also saw some great pictures in our mark making area;  we had ‘Daddy and baby’ dinosaurs as well as children enjoying experimenting with patterns (stripes, circles, dots) on dinosaur outlines. 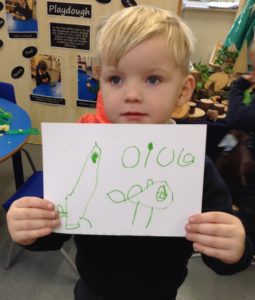 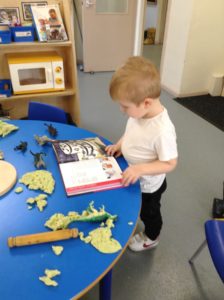 In maths, we’ve continued to look at repeating patterns (colour, shape and size) and children are beginning to be able to select what would come next. For example, in the game shown on the interactive whiteboard in this photograph, children had to look at which shape and/or colour would come next on the train. 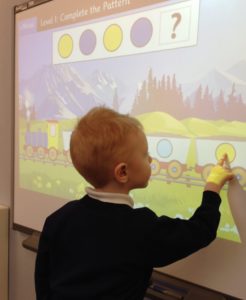