Living and Learning – Physical health and well being in the media 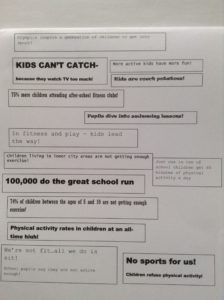 “The most negative headline is: Kids are couch potatoes.

I think this is unfair because I do 12 hours of gymnastics a week. I also think most children do at least one, if not more than one, after school sports club a week. It makes me feel annoyed that someone has written this headline.”

“The most negative headline is: Kids are couch potatoes.

It make me feel like I should be doing more exercise because I’m like a couch potato sometimes. It’s a fair headline because some people sit on the xbox all night but I do a bit of each: a bit of exercise and a bit of xbox.

The most postive headline is: Olympics inspire a generation of children to get into sport.

The Olympics definitely inspired me. I was inspired to get faster at running  100m and to play table tennis!”