We’ve followed a number of different interests in Nursery so far this week, from chips to caterpillars!

On Monday morning, whilst having ‘tea’ in the home corner, we were eating chips and talking about where they came from.  Many children suggested the supermarket and Chinese take-away, but nobody knew which vegetable they were made from. We read a story called ‘Oliver’s Vegetables’. In the story, Oliver loves chips and they’re all he wants to eat. When he visits his Grandad, Oliver is only allowed to have chips for his tea when he can find the correct plant growing in his Grandad’s allotment.   After a quick trip to the shops for some potatoes, children enjoyed making chips in the afternoon.  They cleaned the potatoes and were very careful when cutting them into chip shapes. Their favourite part had to be eating them! 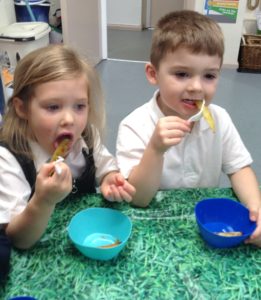 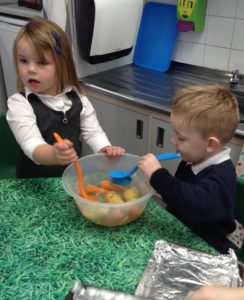 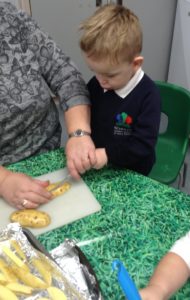 We also found a very unusual caterpillar in Nursery on Monday. It had green and black stripes and was very hairy. It even had a big, red spike on its back.  Children were really excited about it and enjoyed using the magnifying glasses to look at it closely. They drew some great observational drawings and tried hard to copy the stripes and prickles. We tried to find out more about what type of caterpillar it was; we used a nature book and searched on Google until we found an answer.  It was a Pale Tussock caterpillar which will eventually become a moth. 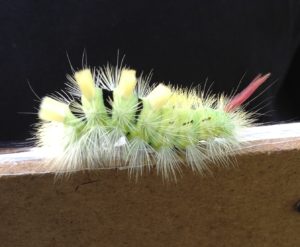 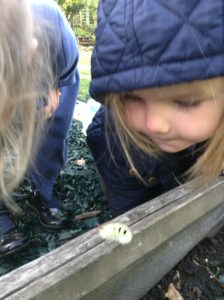 After lots of pizza shop role play, children became real pizza chefs on Tuesday and made their own pizzas. They spread the tomato paste onto the pitta breads, sprinkled the cheese on top and added a few basil leaves.  This provided lots of opportunities for discussion, as we watched what happened to the cheese as it melted. 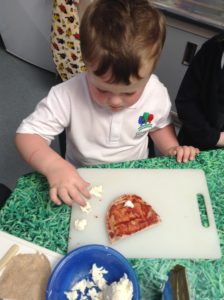 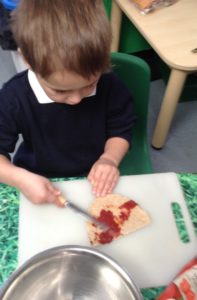 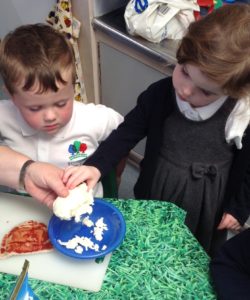 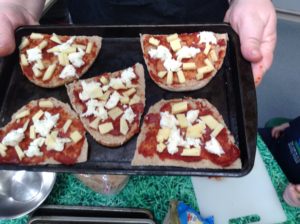 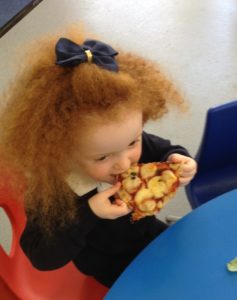