It was great to see the excitement and interest in our new dinosaur enhancements last week. Children were particularly drawn to the maths area where they lined up the mini dinosaurs to count them and to sort them according to various categories including size, type and colour. We began to find out lots of facts about dinosaurs; we talked about their body shapes and what type of food they ate. Children enjoyed learning some new big words, including herbivore and carnivore. We wonder if they can remember what they mean?  Many children became interested in volcanoes and lava throughout the week. We watched some videos of volcanoes erupting and the children were set a challenge… Could they make their own erupting volcanoes using the Duplo bricks? There was a lot of team work as the children created a volcano shape using the bricks and with a bit of vinegar and bicarbonate of soda magic, they enjoyed watching the fizzing and bubbling as their volcano erupted! 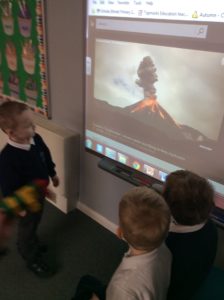 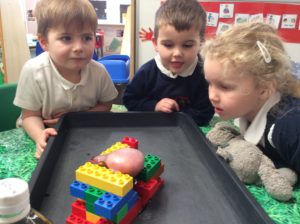 Mark making was a popular activity outside last week. Children used the giant chalks to draw lines, circles and crosses on the playground. (Great for developing their gross motor skills!) 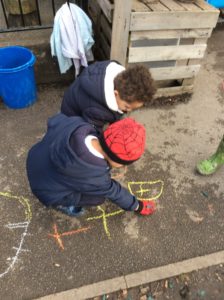 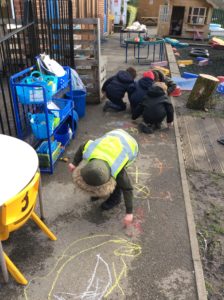 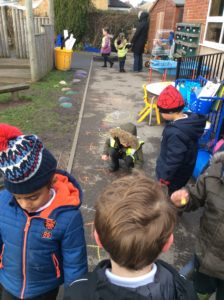 Week 6 – What are we learning this week?

Wow! The final week of half term already. As the children are still keen to find out more about dinosaurs, we’ll continue to see where this interest leads us this week.  In group time, we’re learning to hear the initial sounds in words and we’ll be learning a new letter.  It’s the first sound in one of our favourite dinosaurs… stegosaurus. We’ll play eye spy with objects beginning with ‘s’ and will sort objects into those beginning with ‘d’ and ‘s’ sounds.

You can listen to the ‘s’ Jolly Phonics song that we will be listening to  here. Children don’t need to be able to write the letter ‘s’ just yet, we will focus on the ‘s’ sound that it makes and will identify words that begin with this sound. What can you find at home that begins with ‘s’? If you notice your child becoming more aware of sounds, remember to e-mail us their Wow moments.