A child in Foundation class found a piece of rubbish on the floor whilst in the playground. We were very impressed when he chose to pick it up and put it in the bin. This started a class conversation about littering and how to look after our environment. We talked about why we need to put rubbish in the bin.

We talked about what to do with our own rubbish and what we could do if we saw rubbish on the floor.

We also talked about keeping ourselves safe if we did see rubbish on the floor. The children decided they could ask an adult if it was safe to pick up litter and put it in the bin.

After talking about littering, we decided to write posters to remind people to put rubbish in the bin. 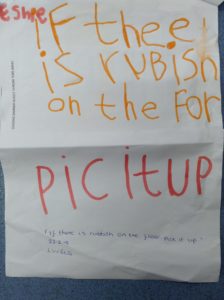 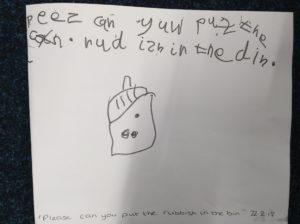 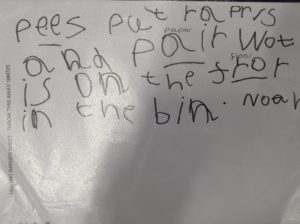 We then went to speak to other classes in the school to share what we had discussed and give each class a poster to remind people to put rubbish in the bin.

We were very impressed with Foundation’s mature understanding of how to look after our environment!