How writing progresses across year groups

Now that we’ve finished the school year, we thought you might be interested to see the progress in writing from year to year. Below is an example of writing from each year group. We’ve chosen a good, typical example, not a flawless one. Also, it’s important to note that teachers don’t assess a pupil’s writing skills on just one piece – it’s writing a selection of different pieces over time that matters. 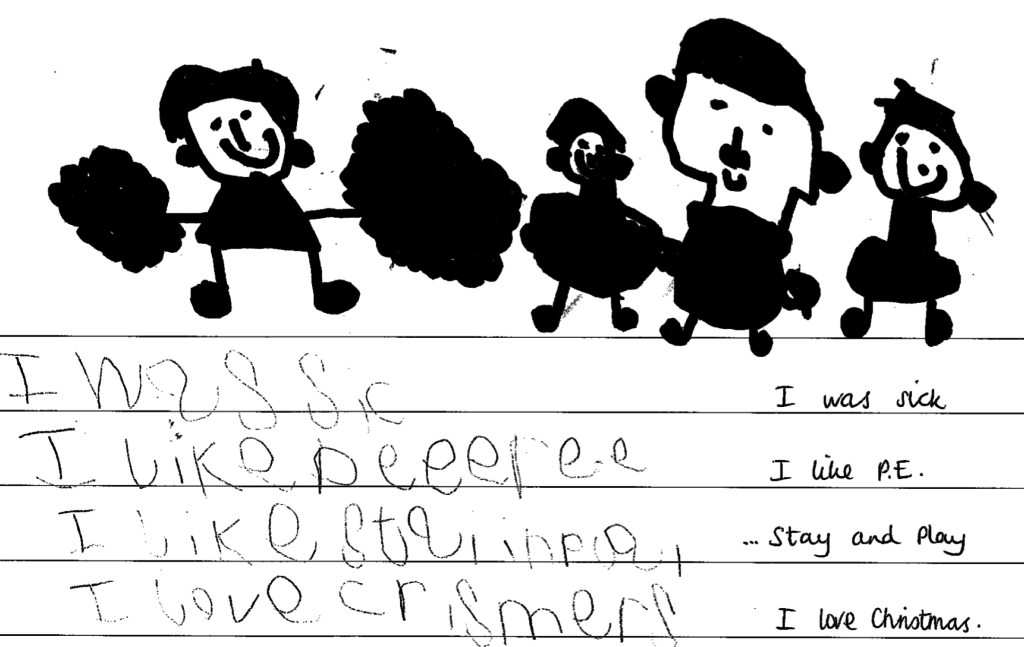 At the end of Reception, this child used his phonic knowledge to write words in ways which match their spoken sounds – while some words may not be correct, they are spelled in a way which is phonetically plausible (such as Crismers for Christmas). He has also accurately written some irregular common words (was, like, love). He could read back to the teacher his sentences – although a little small, the gaps between the words (we call them ‘finger spaces’) help. 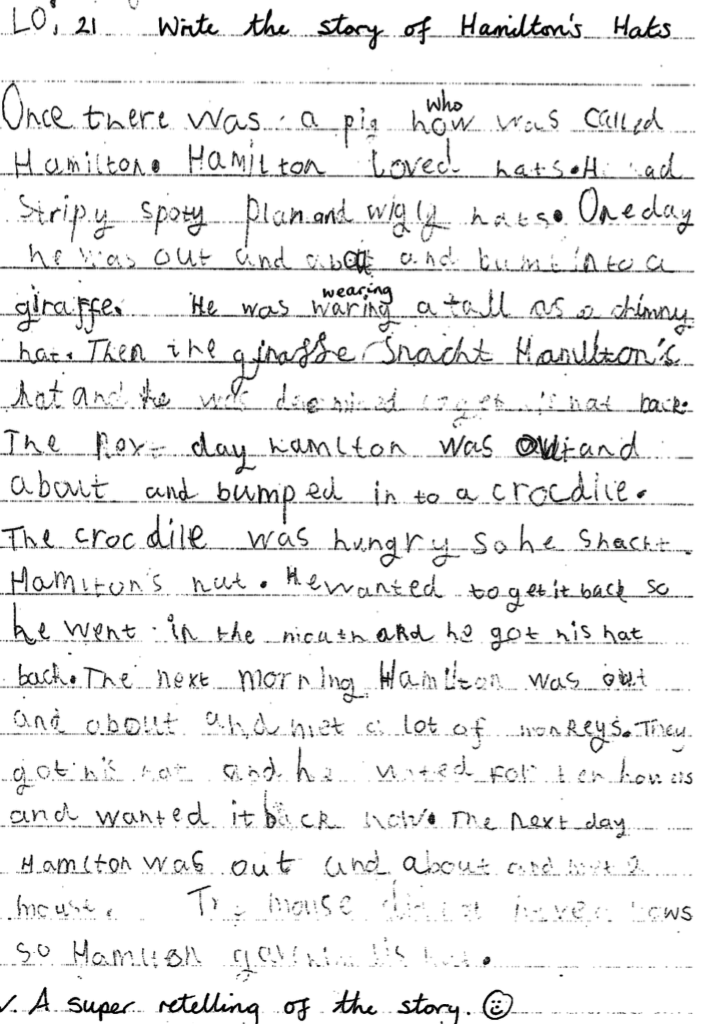 Hamilton’s Hats is a great story, and it’s a great idea to get your child at home to re-tell a familiar story, even if it’s just orally, rather than in written form as it is here. Straight away you can see what progress is made in Year 1! Sentences ​are effectively demarcated with capital letters and full stops; also and is used to join two clauses (clauses are ‘chunks’ of words that could be a sentence on their own). The sequence of sentences build up to form a narrative (a story) – it doesn’t matter that the story is not the child’s own because of all the great skills they’re practising, and because they’re writing quite a lengthy piece, too, but it manages to stay coherent. 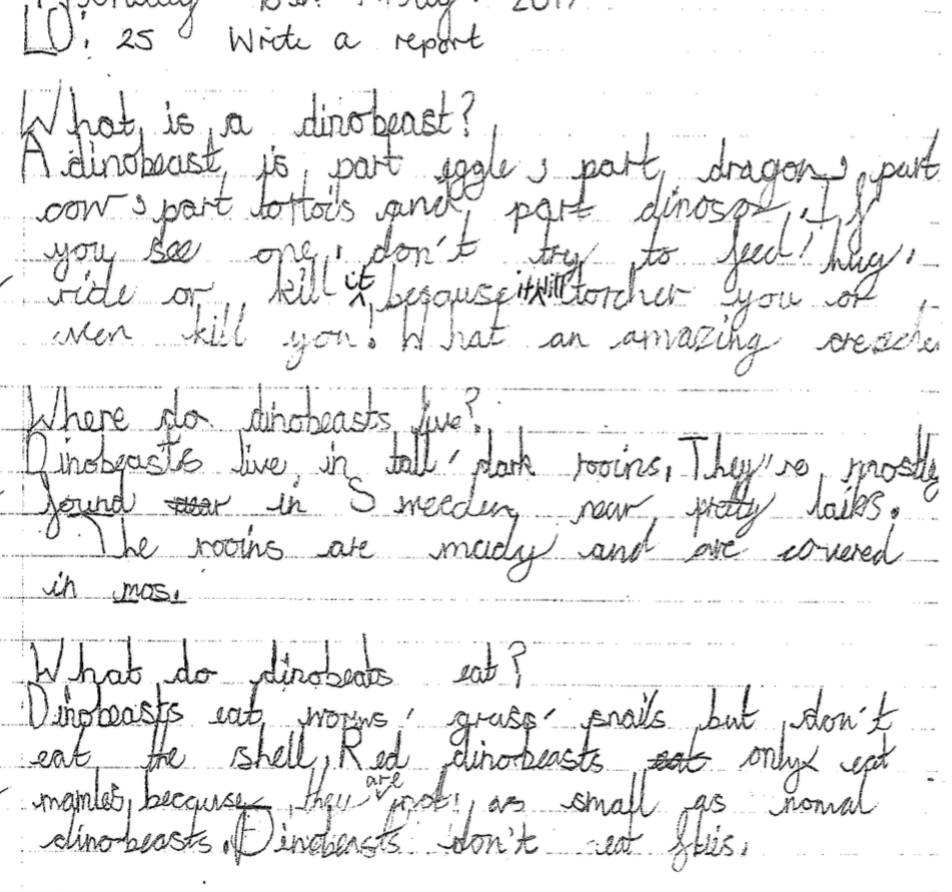 It’s not an expectation for Year 2 children to write in paragraphs or sections, but we find most children are able to do this, especially for non-narrative (non-story) writing such as this report (a report presents the reader with information, even if the information is fictional, as is the case here). In this writing, we can see a big jump in progress from the Year 1 piece, perhaps in two main ways: the range of punctuation used (we start to see question marks, exclamation marks, commas and apostrophes for contraction) and the neat, cursive handwriting. Also, more conjunctions are used: not just and, but also if, because, or, but.

You can also see the beginning of the writer’s editing. Next steps here would be to focus on identifying some of the spellings that need to be corrected: although it’s good the writer has made phonetically plausible attempts, like rooins and tortois, he now needs to have opportunities to check the spellings of at least some of the words. This is something you can practise at home: you could write a sentence with a deliberate spelling error, and your child could identify which word, and perhaps then go on to correct the spelling using a dictionary, or even try an internet search: if you Google ‘spell tortois‘, the first result will even say the word out loud, (it can be reassuring to hear the word you’ve found is the right one!). 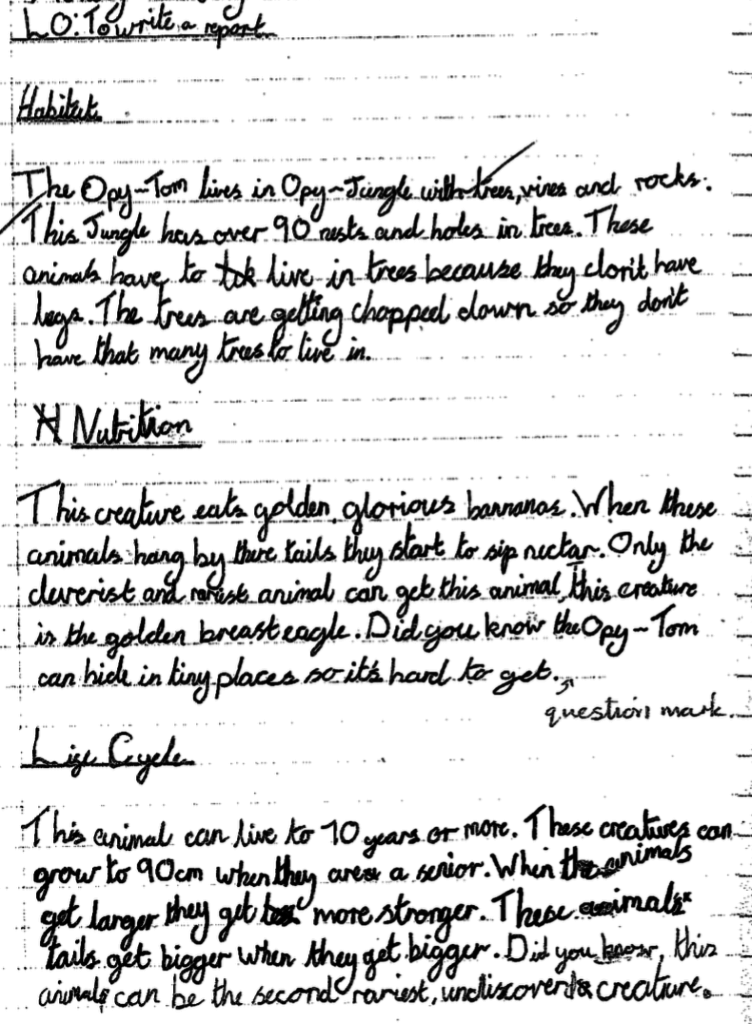 This Year 3 writing is the same task as the Year 2 one – writing a report, a factual piece (even though the actual content uses the writer’s imagination). There are encouraging signs of progression: hyphens (Opy-Tom, for example); rhetorical questions (although these need a question mark); and – perhaps easiest to miss – a wider variety of ways to start sentences (The Opy-Tom… , These animals… , Only the cleverest… ).

There’s one example of what we call ‘squashed sentences’ or, more accurately, run-on sentences. Can you find it? (Answers at the end of this article.) Even though the writer has used a comma, it’s still not ideal, as the comma is too weak to split the two clauses up. (It’s called a comma splice – a very common error, but one that can really undermine good writing later on.) 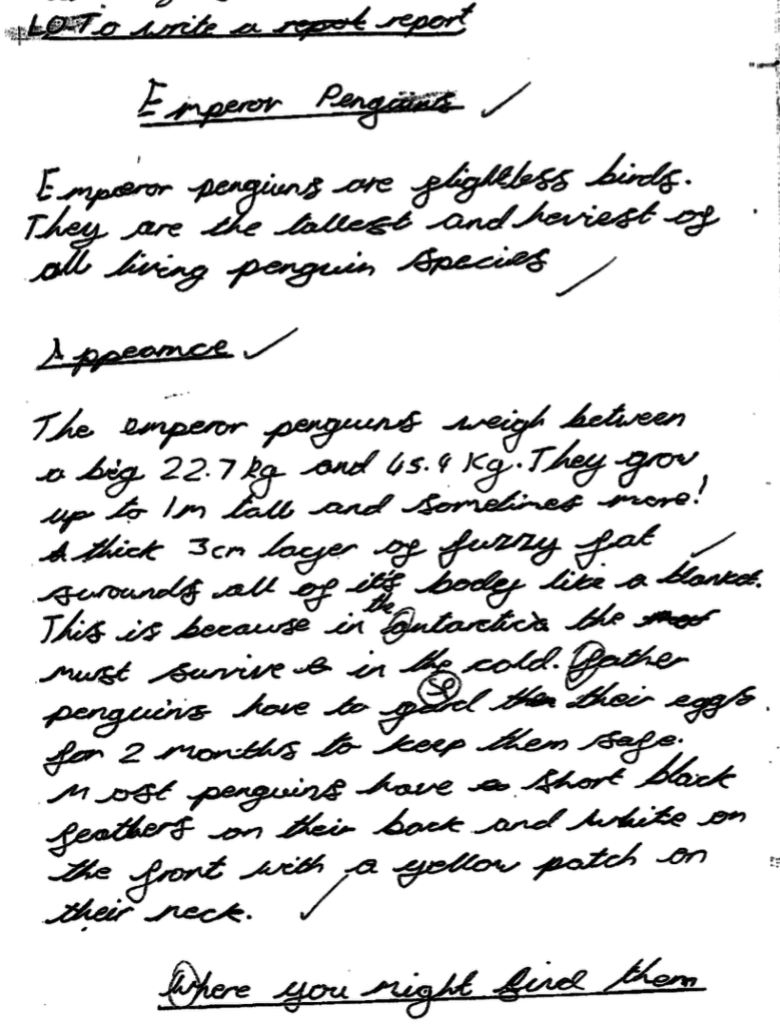 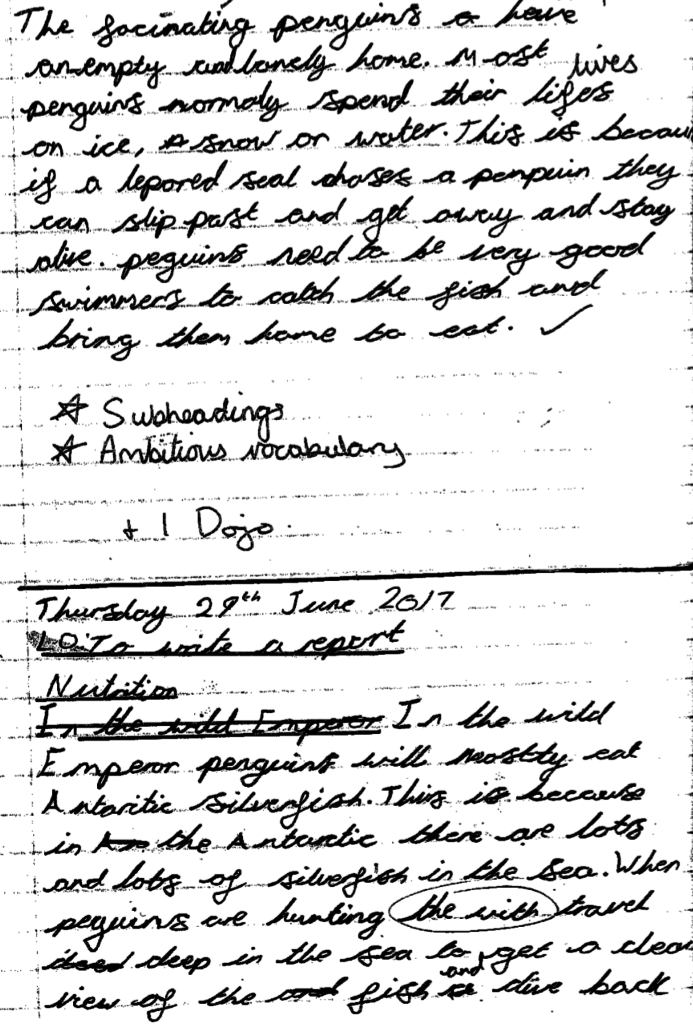 This Year 4 writing takes the same idea as in Year 2 and Year 3, but this time the content is about a real animal – that in itself shows progression. We can see the variety of ways to start sentences continues to widen, and the choice of vocabulary for description is good. What this writer needs to do more of is be alert to the need for capital letters, and teachers in school are building in more times for children to edit and improve their writing. 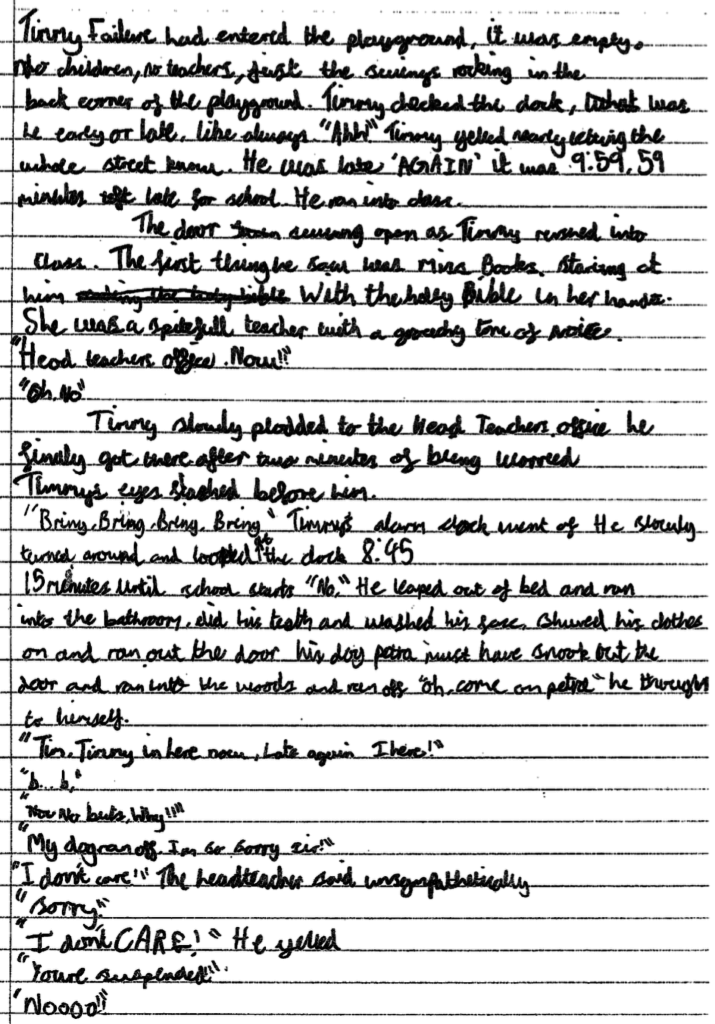 This Year 5 piece of writing is narrative – part of a story. There are a few errors dotted throughout – this is before any editing and improving took place. There is a good range of sentences, from short and simple (these help to develop emphasis and pace) to longer, more complex ones (these help to build up description). Punctuation is progressing – there is now ellipsis, for example. We can also see paragraphs being used effectively, and some good word choices (spiteful, plodded). A flashback scene (beginning Timmy’s eyes flash before him) is an ambitious attempt to organise writing in a more unusual way. 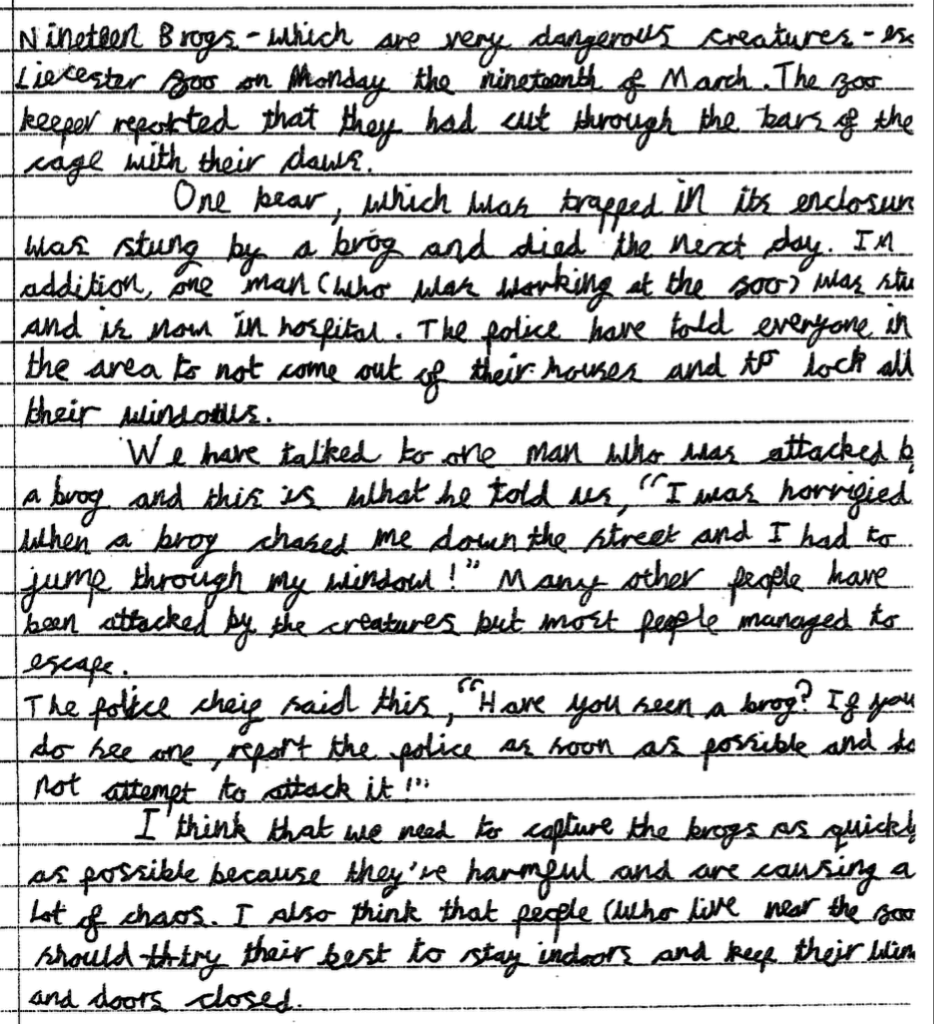 Here we arrive at some Year 6 writing. The task is to write about an imaginary creature (‘brogs’), as we’ve seen before, but this time to also build in a story and to produce some journalistic writing, for a newspaper perhaps. And your task? Think about how this piece shows progression across the years…